on the touch screen of the antique ATM from the early 1990s, instead of the usual dialogue fields, short video clips can be called up by touching various buttons, which address the financial world.

the ATM was an exhibit at various events:
1993 at an art exhibition in the foyer of minolta nürotechnik in munich.
2013 at a cultural event in the messesatdt (trade fair city)munich.
2016 at an event of the danton denkraum in the cultural centre giesinger bahnhof, munich. 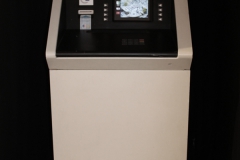 here a little look into the display of the ATM⇒